How learning to fence also taught me about life, the universe, and everything 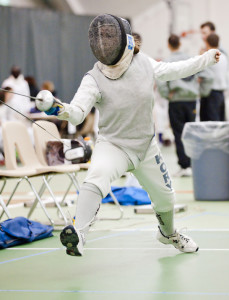 Me, fencing in a competition at Vassar College in 2010.

Fencing: More than parries and ripostes.

I used a fence a lot. For ten years, I picked up a foil and went on guard on the strip two, three, sometimes five days a week. Or more, with tournaments on weekends. I was not alone: my teammates did the same. Yet despite the dedication so many of us gave to the sport, the first coach I had, George Platt, used to say that when it came to life versus fencing, "It's just fencing!"

However important the sport is, in the end, "it's just fencing!"

It's as important as you make it to you. The rest of your life, well, that matters too.

I was thinking about this recently in relation to other life decisions, balancing time and energy. And I realized: I really did learn a lot, being a fencer.

I learned how to make something a priority. How to commit to something.

I was never late to practice, and only missed a day if I was coughing and running a fever. I gave up other clubs, movie nights, Halloween parties, and much more because I had practice, or I had to sleep, we were leaving at 4am for a competition tomorrow.

But remember, it's just fencing.

But being busy was no excuse to skip practice. After all, we were all college students; we all had homework and tests and classes. By joining the fencing team, I was saying, this is a priority for me. I'm going to put time and energy into this. Joining the team meant that other things that could have been priorities -- other clubs, social events -- were not so high on my personal list. Fencing was. So I made time for it.

Fencing was like that. If you didn't care how many bouts you won, if you didn't care how well you fenced, well, guess what, no one else would really care, either. Your teammates or your coach might be disappointed. But you're the one most invested in what you're doing.

Waiting for a bout to start at the Denver North America Cup event in 2005.

Related to that: When I was fifteen or so, I was fencing in a local competition, a direct elimination bout against a woman of about the same skill level as me. We kept tying the score: 4-5, 10-9. The last round, I won. My dad said it was because I cared. It was partly endurance, too. But if you want to win, you'll put in more effort and go farther. You have to enjoy it. You have to be a good athlete. And you have to be competitive. I remember George saying once that if you don't care when you lose -- if you aren't upset that you lost -- then you didn't care about winning, either.

When you fence, you make a lot of mistakes. You get hit, over and over, in the same way, by the same opponent, because you keep making the same mistake. It's frustrating. You lose a bout 0-5 because you kept making the same stupid mistake. Sometimes to a girl you used to beat 5-0. And the thing about fencing is that it's such an individual sport. If you lose, it's all on you. Sure, sometimes the referee makes bad calls. Sometimes the other girl just is a better fencer than you. But not always.

There are two parts to dealing with this. First, the practical side: You lost this touch. Or you lost this bout. What did you do and why didn't it work? Critically evaluate your actions. See the mistakes, or the places where someone out-fenced you. Try to improve. Adapt. 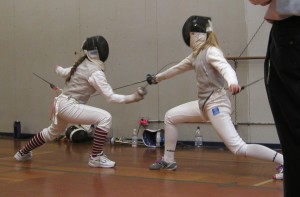 George always taught that if what you're doing isn't working, do something else. Change something. Change anything. Sometimes, if you find yourself doing the same wrong thing over and over, it doesn't matter what else, so long as it's different: a different parry or attack, different timing or distance. Don't get stuck. Don't let your opponent score the same way twice. If what you're doing isn't working, change what you are doing.

The second part is emotional and mental. In a pool round in a tournament, you only have 5 or 6 bouts. You just lost one 0-5. You can't let that negatively affect the next bout. You have to move past it. Re-focus. You can't be flustered and upset when you step back on the strip.

I learned to consciously regulate my emotions and mental state, using combinations of music on my ipod, self-talk, and habits before and during competitions to reinforce states and moods that I empirically found to lead to me fencing better. You can't lose your cool. For me, I fenced best when balanced: Not too excited. Not too calm. Not too upset. Focused. Edged. Finding that state, keeping it, and regaining it was as critical to my performance as good hydration.

George also used to say that it was the practice you did six months ago that matters most in your competition today. And day of, I had my routines. You warm up before a competition. That isn't just to prepare your muscles - it was also part of getting ready mentally. Getting your mind in the right space. It was about eating well, and sleeping well -- not sacrificing an upcoming tournament to one evening off. If that meant missing parties, other events, whatever -- well, preparation was key. That was what commitment was. Sleeping was part of that. Eating, hydrating, training.

When taking a ballroom dance class two years ago, I realized I'd learned something else from all that practice: How to practice. You learn it slow, practice it perfectly, under control, slowly, until eventually, at top speed during a bout, you do okay. You can't practice sloppy and expect that when it matters you'll be any less sloppy. Practice perfect.

A group of fencers at George Platt's Swordplay Fencing club in 2006.

My senior year at Vassar, there was controversy over whether varsity sports should count for academic credit. Suffice to say, one piece of the argument was that yes, you learn a lot doing a sport. If credits equate to learning, you learn as much -- if not more! -- in a sport as you do in other classes. You may learn different things. But you do learn.

(As a side note, the divisions between disciplines, quantifying or categorizing learning, and deciding what "counts" as an academic class don't always make sense to me.)

I learned to prioritize. To commit. To fail. To persevere. To adapt. To prepare.