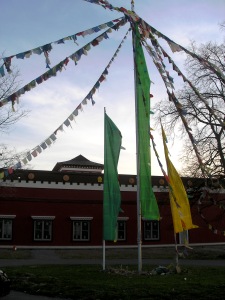 Faded squares of fabric, strung together in repeating blue-white-red-green-yellow chains, crisscross the branches of bare-limbed trees. The gentle wind makes them flutter. Orange-gold light filters into the grassy meadow, touching a row of canvas tents and the temple house beyond. Tsechen Kunchab Ling: Temple of All-Encompassing Great Compassion. This is the seat of His Holiness the Sakya Trizin in the United States, a Tibetan Buddhist monastery established nine years ago.

I spent the past weekend there. The field work office at my college arranges this retreat every semester. Everyone I've talked to who has previously attended says wonderful things about it; this semester, one of my friends told me she was going: I should join her! I like learning new things, so I signed up. A good decision: I didn't return all chill and zen, as one friend told me his roommate had, but I certainly gained a few new ideas and approaches to mull over, and dipped my hand into a previously unfamiliar piece of the world.

The first evening, the twenty-something students--most from my college, four from another--gathered in the shrine room, sitting cross-legged on cushions as we listened to Khenpo Kalsang introduce Tibetan Buddhist philosophy. He began by telling us, "Do not take any of what I say on faith. Take it through analysis, if there is some benefit in it for you." Religion, he said, is like a drugstore full of medicine. You do not go to the drugstore and buy everything in it--you just buy what would be beneficial to you now. You believe the other medicine may have just as much value, but in other situations, not this one.

We discussed the foundations: the Three Turnings of the Wheel of Dharma; the four noble truths; karma; defilements; the six perfections. When we talked about the giving, and how one should try to give what one could to other sentient beings (in the form of material items, kind words, protection, and so on), Khenpo Kalsang shared a story of the Buddha, and how the Buddha had given his flesh so that a family of hungry tigers could eat. "So," a fellow student asked, "Giving one's life for another being is the ultimate gift?"

Khenpo Kalsang, he smiled, and shook his head. "Only if you feel no regret," he said. "If you feel regret, it destroys the merit." Until then, preserve your own life, and do not give away anything that would cause you regret. This struck a chord. Self-preservation above all else, unless the right situation arises. 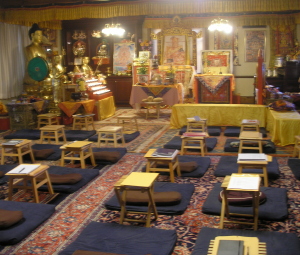 Later, I talked to the resident nun, Ani Kunga, about psychology and cognitive science. She had studied psychology for a while in grad school, but now holds the view that psychologists are going about understanding the mind and understanding the knower and what knowing is the wrong way. "Psychologists," she said, "study the brain and the self externally. Ever since the 1920s, their science has been about observation of behavior, questionnaires, recordings of electrical brain activity. But the mind can only be known by you, the person whose mind it is." She said philosophy and epistemology were doing it right: looking at experiences from the inside.

A big overlap exists between Tibetan Buddhism, psychology and cognitive science. All three examine the distinction between the self and others, between the observer and the observed, between knowing and the knower. I agree with Ani Kunga to some extent--only so much can be known about the mind from external observation. But this doesn't mean that there isn't merit to such studies, nor that nothing of use can be learned in that way.

Tibetan Buddhist philosophy also approaches the mind and the self from the inside. During a second philosophy session, Khenpo Kalsang translated a sutra about a king who received advice from the Buddha. This sutra delved into some questions about the nature of the self, whether the self is a delusion, and how the clinging of self is a defilement. I intend to discuss it in more depth later, so stay tuned.

In the afternoon, a group of us gathered outside for a meditation session with Ani Kunga. Sunshine melted lazily through the tree branches above, a breeze animating the branches' shadows so they danced between our cushions. Compassion and anger were the session's topics. The key message:

Ani Kunga explained several off-session and one on-session technique for dealing with negative emotions (anger, hate, irritation, stress, jealousy, and so on). All the methods built off the idea that you are in control: anger is an emotion, and you can change your emotions. Stay tuned for a more in-depth post on the topic.

Another of the day's activities was making prayer flags. As Ani Kunga explained, "Prayers, wishes, hopes, aspirations--someone, many people, may share those with you. Hanging the prayer flag shares your prayer with everyone else in the world. This may do no good at all, but it may--if everyone hopes and wishes and dreams and aspires, perhaps it will do good. It may not. But if no one shares their prayers, it will certainly do no good. So on the off-chance that it will help, why not?"

This weekend reminded me that I'm not done learning. If I stay still long enough, if I've achieved a relatively constant level of happiness and satisfaction, I forget that I can and should continue to seek out new ideas and approaches, and incorporate beneficial ones into my life. A person is never "done," and so, I'll continue to observe and discuss and study, trying to pick the directions in which I'll change, and trying to make tomorrow better than today.

Ever onward and ever upward.