I wrote the following for the Vassar memories portion of the sesquicentennial website. You can find it there, or just read it here: 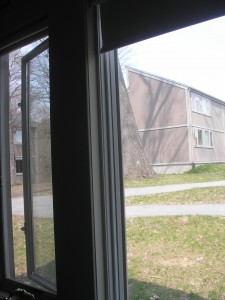 The Start of Whatever Happens Next

I sit by the glass pane in my room, my bed lofted up to window-seat status. The late afternoon sunshine sends long shadows across the central TA quad, grass sliced by dark grey pavement paths and thin strips of light that make it past the apartments in the west. Most of the trees are bare-limbed yet; I'm still not used to the long winters, keeping the popcorn of apricot flowers at bay until well into April. I can see an evergreen or two from here; I saw turtles in the Casperkill yesterday, and my housemate exclaimed over a robin hopping down one of those paths just this morning.

If spring is only now tip-toeing out into the open, with warmer breezes and longer days, why does summer feel so close?

The past few weeks have been full of endings. My last end-of-season meetings, evaluations, and dinners with the fencing team. Writing the last pages of my senior thesis. Ignoring the emails about preregistration, housing draw, and next year.

I have a plaque propped up at the front of my cube-box bookcase: "Vassar College Women's Fencing Team, Captain 2010-2011." Is that really what all this time comes down to? A plaque, a pile of textbooks, a sense of nostalgia now that it's almost over?

I pulled out a new notebook today. Some people measure their lives in chapters, or by photo albums and video clips. Sometimes, I think I measure mine in journals. Today, it felt wrong to keep on in the old notebook, plastic pink cover and pages three-quarters filled, loose sheets of notes slid in the back and beneath the front cover, a notebook I bought in an office supply store in Sydney, Australia, for one of the classes I took there (and later re-appropriated). It was a college notebook: wide lined pages, a spot at the top for a six-digit date, perforated pages and a cut-out slot on the cover for storing a pen. It was a journal of uncertainty; it held the worries, fears, and dreams of a student far away from the familiar. It held beginnings, endings, reconciliations, the wonder of realizations and the hope that every next step would be just as exciting, thrilling, amazing.

I pulled out a new notebook today, fished it from the big plastic storage bins under my bed, and when I opened it, a silver piece of foil fell out. It had been tucked just inside the front cover, a Dove chocolate wrapper, the kind with little inspirational quotes printed on them. It said, "It's never too late for a fresh start." 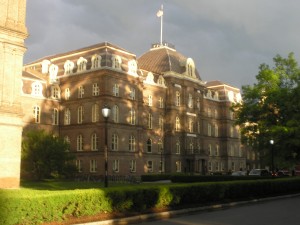 This, it's a notebook for the start of whatever happens next.

With summer coming fast, I'm paying more attention than I ever did to all the little things around me that I love about Vassar. The green floor in Walker Bay 5, where I've spent more hours than I'll ever count training with the fencing team. The way a sunset looks across Ballentine field. The sound of Barefoot Monkeys calling "boo-a-woop!" from distant parts of campus, with similar cries echoing in return. Even the weird patterns painted on the ceiling in Main's front lobby -- have you ever looked up at them?

Four years of my life.

Seven semesters and two summers at Vassar. One semester abroad. One summer in Virginia.

People. The adventures we dreamt up. Favorite haunts, favorite classes, clubs and sports, lectures and workshops.

So many moments. All it takes is one minuscule event -- a flip of bits, a neuron firing, a butterfly's wings in South America -- to start a change. 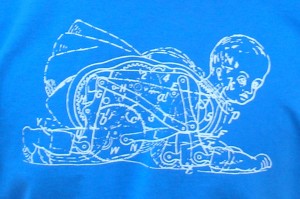 Taking Introduction to Cognitive Science with Ken Livingston freshman year. I took it because I'd read a book on consciousness, because when I'd read a book about dreaming I found out that no one really knows what goes in our heads, because I realized there's still more to learn, and I'm nothing if not fascinated by the unknown. The final paper in that class was to pick a chapter of Paul Thagard's Hot Thought, in which he presented models of !emotional cognition and applies them to just about everything (one phenomenon per chapter), and elaborate on it. I picked the chapter on the emotional coherence of religion. After reading those twenty-two pages, I realized I'd never learned how to bullshit a paper, and thus, that I knew far too little on the subject to even scrabble together a rough draft. I promptly checked out a huge stack of books on cognition and religion from the library. I supplemented these with a whole bunch of pdfs from journal databases online. I remember my roommates being a little confused, or maybe concerned, at the amount of effort I put into that paper.

I remember, mostly, being absolutely certain that I had to keep reading if I wanted to know enough to write a good paper on the emotional coherence of religion.

I declared myself a cog sci major early sophomore year.

Some moments were mundane: Laughing at the "Dead End" sign hung up on the end of Collegeview Age where the road met the cemetery. Taking photos of the magnolias in bloom. Staring up at little flakes of snow, floating down in front of a street light. Chasing after womp-womps and squirrels and deer.

Simple long-lasting jokes. One came out of the very first cog sci program party I attended. I was a freshman; I didn't know anyone and I was one of maybe two freshman there -- everyone else was familiar with the lay of the Kenyon Club Room, its lack (and great need) of a giant moose head hanging over the fireplace, the fact that Gwen Broude always brought cookies and Ken Livingston always brought thick-crust pizza from Uno's. I was introduced: "Hi, have you met Jackie?" I was re-introduced: "Hi, have you met Jackie?" and re-introduced again, enough times that it became a thing. Every cog sci party thereafter, this particular group of 2010s and 2009s reintroduced me to each other.

Some moments defined the rest of my college career. 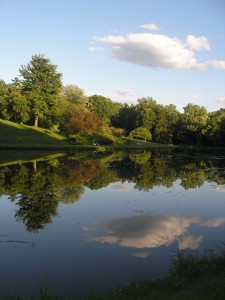 Sitting cross-legged in an armchair in the Kenyon Club Room. I was wearing a bright orange skirt. The cog sci faculty had just had a debate on consciousness, and I hadn't stood up to leave yet. Ken Livingston asking me whether I'd like to be one of his URSI students for the summer.

Exchanging emails with a friend over my first URSI summer: trading book recommendations, discussing relationships and research and brains. Returning to campus: "Would you mind terribly if I kissed you?" Meeting another new friend as a result of Vassar, back home before the start of another semester.

Backstage waiting for the far-too-familiar opening music of the Rocky Horror Picture Show. An airplane to Colorado for the Grace Hopper Celebration. The trek between Main and Cushing, the tower room where my friends and I gathered for homework parties.

Sophomore year was the year I didn't spend Thanksgiving with my family. I'm from across the country; that break is short in comparison to the amount of traveling. A senior on the fencing team invited a couple of us far-from-home friends over for the holiday -- he spent time growing up in Australia, and one of his friends was Australian. The other girl was Greek. I was the only American tagging along on the adventure.

Deciding, after that, (with a scant week until the application deadline) that I wanted to go abroad. 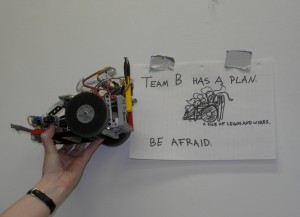 Late nights in the IRRL. One Thursday, when my robot competition team's microcontroller fried and we spent the night frantically googling possible fixes.

Papers and books and highlighters spread out across a dorm room floor, three of us staying up past 2am pounding out the last pages of our ant papers.

Evenings in the Main kitchen, making macaroni and cheese or curry or trays of almond cookies.

A second URSI summer, cut short because the Australian semester starts at the end of July.

Many moments were at Vassar, but not all. One fine spring night in early November, I ate at a Turkish place in Newtown, Sydney with some of my international friends. Australian, Philippine, Japanese, Mexican, Russian. One of them handed me a US penny, saying, here, a little taste of home.

Tuesday morning Coffee and Cakes in Sydney, standing in the grass by a table of orange juice and tea and cookies, chatting with the rest of the Unimates. Knowing that when any of us traveled the world, we would have friends in nearly any country we visited.

A summer in Virginia. Showing my badge every morning to get into NASA Langley, working in an air-conditioned building-inside-a-building. Quadcopters, open source flight simulators, the Parking Lot Exploration Rover, a pirate festival, Wednesday evening volleyball, roller coasters and fireworks. 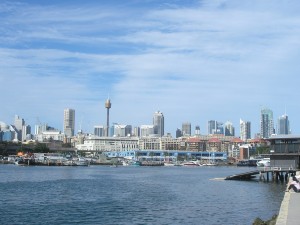 Back at Vassar, senior year, I was utterly delighted that I had to buy fourteen plus books for my cog sci and computer science classes. The first day of the Things in Context seminar, Gwen Broude announced that everything is context and context is everything, and how it was hard to teach a class on everything, but she'd try. I'll forever look at the world as a dynamic system, in terms of context and embodiment, in terms of correlated sensorimotor and subjective experience.

Long hours in the Neuroscan Lab, re-dubbed the EGI lab after the equipment got replaced, typing line after line of text for our stimulus set or squeezing in another participant run. Wanting clean data and results out of that EEG study; finally re-running the whole thing nearly two years later.

Some moments were about my life as a cog sci major, but not all.

Swinging an axe at a candy-filled computer hanging from a tree; laughing as all the computer scientists ran to scoop up tootsie rolls and jolly ranchers.

Turning down invitations to dances and parties, hours spent at my laptop or in the OLB computer lab, trying to finish assignments before the weekend's fencing meets.

Playing frisbee in the parking lot outside Walker. The Rock and Roll Hall of Fame. The morning the bus broke down, 5am and probably negative degrees outside. The van safety course, and the nutritionist. My fencing girls, making up new lyrics to currently popular songs: "We're on a bus!" "All the sabre ladies..." "Just fence!"

Making history. Singing Queen's "We Are The Champions" on the way back from Wellesley: the Vassar Women's Fencing team won our conference for the first time ever. Ice cream socials and picnics on graduation hill. 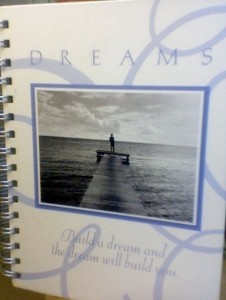 So many moments. So many memories.

As I write this, middle of April, glass pane separating me from the sunlight and the squirrels bouncing through the grass, I hold a new notebook in my hands. It's white and periwinkle-blue, bound by a silver spiral. A photo is printed on the front in grayscale, framed by thick blue lines: a man silhouetted at the end of a wooden pier, staring out across a shining ocean. He can see the horizon, I think. Below the photo are written the words "Build a dream and the dream will build you."

This, it's a notebook for the start of whatever happens next.

I loved my time at Vassar. It'll take a long time for these patterns of neural activity to fade.