Sutra: Advice to a king 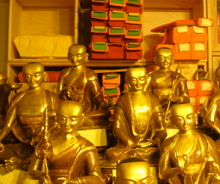 I said I'd return to discuss a sutra that Khenpo Kalsang translated during the Tibetan monastery retreat I attended. Here's the scoop:

The self is a delusion

Khenpo Kalsang translated a sutra called Advice to a king for the group of us who were staying at the monastery. The sutra told the story of a king who encountered the Buddha and wished to kill him. The Buddha asked the king, "Conflict and fighting and killing cause exhaustion and suffering in this life. Why would you enjoy this?" The king, considering this, responded that he enjoyed fighting because he always conquered his enemies. The Buddha said, "Great king, these are very minor enemies--insignificant! There are much greater enemies that you should fight." He explained that the greatest enemy was not another man, or another country, but the clinging of self. He explained how one could fight this enemy with the six perfections and with selflessness. The king is convinced, and instead of killing the Buddha, becomes devoted to him.

The clinging of self, or self-cherishing, is one of the defilements. This means it is a cause of suffering (recall that if you manage to become free from suffering and the causes of suffering, you'll eventually reach nirvana). Simply put, one develops an attachment to the five aggregates (body, mind, feeling, perceptions, activities), and one fears losing the parts of the self through death, illness, hunger, cold, and so on. This is a problem. The way to triumph over self-clinging is to realize that the self, the "I," does not exist in reality.

The gist of the argument presented in this sutra is this: the self is a delusion because it is a construct based on the aggregates. We have names: names are labels, and so the name is not a self. The body is also not the self, because the flesh and blood are just like the walls of a house: that is, a combination of elements that are, if you break them down enough, no different than the elements that make up the walls of a house. The mind is not the self, because it has no matter form. Because self-clinging is based on these three things (name, body, mind), through this analysis, the personal self cannot be found. It's a delusion.

Something is missing here. Simply being unable to pinpoint the exact location of the self doesn't mean it's entirely a delusion. I'd agree, based on other readings, that there is no one physical thing responsible for the sensation of selfhood. There is no single structure in the brain that we can point to and say this is where "I" am. This is the where consciousness happens. But that's all the argument can say: that no one thing is responsible. The self could just be an amalgamation of things: the body, the mind, the interactions of these with the world. The five aggregates that compose a person. The agent and the environment. The self could just be the name we give this combination of things.

Other sutras and other pieces of the Tibetan Buddhist philosophy may better explain this delusion. But even if they do, I may still just fundamentally disagree with pieces of the philosophy. (E.g., that dualistic bit about the mind having no matter form.)

The take away message may be this: Whether or not the self is a delusion depends on your definition of "self." Go figure.