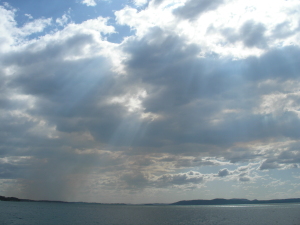 Here's the route he takes in the first few chapters of the book.

Definitions of atheism and the problem of good empirical grounds

By "anthropomorphic," he references Zeus and Wotan -- gods for which we can know approximately what it would be like to encounter or observe them. By "non-anthropomorphic," he references the God of Luther and Calvin, Aquinas, and Maimonides, wherein God is transcendent to the world and cannot be pointed to; this God is mysterious and cannot be observed in any way, and certainly not through empirical means because anything that can be experienced and empirically observed is necessarily not an eternal transcendent reality (pg 16).

He then sets out the claims he intends to defend, namely, that

In the first chapter, he relates some relevant autobiographical information: that he was raised with a vague Protestant background; he converted to Catholicism in late adolescence; he attended a Catholic university for two years and studied Plato, Aristotle, and Aquinas; from these studies, he determined that one could not prove God's existence and went elsewhere to study anthropology and philosophy. He picked up influences from Spinoza, Peirce, Dewey, and Marx; also prominent were Hume and Kant's arguments that we have no grounds for belief in God (particularly an anthropomorphic God); from there he made his way to his current brand of atheism.

Here's a brief passage I wanted to share, primarily because I share Nielsen's concern about the jargon used by many philosophers. (Several friends of mine who've recently partaken in discussions of philosophy of religion with me can quickly attest that I regularly complain about the obscurity of the language used in the papers and books we read.)

"[S]ome of them [religious philosophers and theologians] also recognize that with Thomistic talk about Pure Actuality or Tillich's talk about Being-itself or anything of that order, it becomes utterly unclear what, if anything intelligible, is being affirmed that skeptics could not affirm as well. With such Thomistic or Tillichian talk, there is a complicated jargon but not intelligible additional claims of substance. Yet these Protestant thinkers still give us to understand that they themselves believe in something mysterious and profound and crucial to the human condition of which the nonbeliever has no understanding or no real understanding. They seem, however, to be quite incapable of explaining or even describing what this "more" is, though they are confident that they are not just saying the same thing as the skeptic in a more obscure and heightened vocabulary. Given such a state of affairs, I came to wonder, as did many others, if, after all, there really is a more than verbal difference and a difference in attitude between the sophisticated believer and the skeptic or whether such a believer actually succeeds in believing anything intelligible or coherent at all that is distinct from the purely secular beliefs of the skeptic" (p. 37).

In arguing that it should be impossible for someone with a tolerable scientific background and good philosophical training to think carefully about religious belief and then accept religious belief, Nielsen takes two approaches. First, he argues against proofs of God's existence, that revelation and religious experience are not in fact reliable and God cannot be known through these means, and that morality does not require religious belief. Second, building on the first set of arguments, he discusses whether and how we can establish the truth or probable truth of the claims of some religions, and whether we could reasonably accept those claims as articles of faith. He then turns to the question of whether religious beliefs can even count as valid truth-claims.

Essentially, Nielsen wants to show that belief in God is incoherent and thus unjustified.

I'm not going to spend a lot of time elaborating Nielsen's first argument, which is about how Hume and Kant concretely established that one cannot prove God's existence, and that "[r]eason and observation cannot show the unprejudiced mind, willing to follow the argument and evidence wherever it will go, that there is a God" (p. 43). Nielsen notes that many of us now take this fact as almost cultural dogma. He then addresses the question of religious experience:

"Since the destructive attacks of Hume and Kant, it has become rather common, particularly in certain Protestant circles, to claim that we do not need the proofs, even if we could have them, for we have a much surer way of knowing God, namely through direct religious experience" (p. 45).

There are two things wrong with this. First, the problem of introspection and attribution of causes to our thoughts, feelings, actions, etc. This is the problem Gazzaniga unearthed with his studies of split-brain patients; this is what Nisbett and Wilson talked about in their famous 1977 paper. There is no way to know that an experienced classified as "religious" actually is religious and actually has the supernatural as its cause.

Second, and this is the point Nielsen focuses on, the God of Judeo-Christian-Islamic religions cannot be encountered (perhaps Zeus could be, though). If God is a pure spirit, transcendent to the world, mysterious and infinite, how could we encounter such a being? We cannot literally meet with such a being via our normal senses; if we could, then God would not be the God just described. Nielsen reports that some people claim that experiencing God is about experiencing "one's finitude, to have feelings of dependency, awe, wonder, dread or to feel a oneness and a love and a sense of security, no matter what happens" (p. 46). The problem here is that these are human experiences that can be understand and experienced sans God. They can fit into a secular view. As Nielsen goes on to say,

"Why should we multiply conceptions beyond need and say these understandable human experiences are also experiences of God or that they are best explained as experiences of God or as attesting to the reality of God? We are not justified in postulating such odd entities unless there is reason to think that the phenomena cannot be adequately explained by reference to less recherche entities, which are plainly realities of our familiar spatio-temporal framework" (p. 46).

In summary, Nielsen argues that there is no religious experience that guarantees that our experience is of God.

Nielsen then discusses appeals to faith; he asks why, if we must accept religion solely on the religious authority, which authority should we accept? Why Jesus rather than Buddha or Mohammed?

"If there is no proof for the existence of God, no independent way of establishing or making credible his existence, isn't a claim that Christianity is the Truth and the Way both incredibly arrogant, ethnocentric, and arbitrary?" (p. 47)

He also points out that one need not believe in God to have purpose in one's life, which is often another point of contention:

The last of his main points is about the coherency of the concept of God. Specifically, he discusses what it means to talk about God and how the word "God" is grounded in our language. If, as he suggests all Judeo-Christian-Islamic religions do, we leave behind an anthropomorphic and idolatrous conception of God, then who or what does the believer pray and confess to? To what or to whom are we referring when we use the term "God"?

"..."God," unlike "Hans" or "Erika" or "Mexico," cannot be ostensibly defined or taught. As we have seen, it doesn't even make sense to speak of seeing or encountering God. We can't literally be aware of God or stand in the presence of God. The term "God" can only be introduced intra-linguistically through definite descriptions" (p. 49).

Descriptions he notes include statements like "God is the only infinite individual" and "God is the maker of universe" and "God is the only ultimate reality upon whom all other realities depend." The problem with these is that they raise more questions: what is it for something to transcend the world, be an ultimate reality, or be an infinite individual? The words clearly have some meaning grounded in the language we generally use them in, and perhaps some people claim to have a proper conception of what it means for something to be the maker of the universe, but Nielsen argues that it questionable that these kinds of characterizations of God have sufficiently unproblematic meaning for us to actually understand what it is we are referring to.

A question he poses is this: What support do we have for either, e.g., the claim that God is the maker of the universe, or the claim that God is not the maker of the universe? "What experinceable states of affairs count for one view and against the other such that on balance we are justified in claiming greater probability for one view over the other?" (p. 49). Nielsen claims that nothing does -- but if all possible experiences and observations are equally compatible with either claim, then, he asks, what is each actually asserting? How does either sentence succeed in asserting something different than the other? What is one sentence claiming that the other is denying? There appears to be no answer here; Nielsen argues that none of the assertions really assert anything, on either side. As he goes on to say,

"Moreover, it isn't the situation where we just have two theories equally compatible with the available evidence. What we have is one set of putative claims -- the religious ones -- claiming to assert something thoroughly different, through and through mysterious, and of a quite different order. Yet there are no differences of an experientially specifiable sort between the two accounts. Experientially the believer cannot show what more he is asserting, can't elucidate, except in equally perplexing terms, what he means to be saying that the non-believer is not, so that the suspicion is very difficult to resist that there is, after all, no nonverbal difference between them" (p. 50).

Nielsen's conclusion is that the sentences used to talk about God, and what the word "God" refers to, are such that we cannot ascertain their truth or falsity and cannot distinguish between assertions and denials except verbally. In which case, he suggests, the religions that speak of God thusly are tied to such heavily problematic conceptions that they are rendered incoherent. How are we justified in believing in something so incoherent?

As I briefly alluded to, this is just what Nielsen says in the first couple chapters. It'll be interesting to see where he takes his arguments over the course of the next couple hundred pages. I also have a more recent work of Nielsen's sitting in the stack of books waiting for my attention. Perhaps in a week or two I'll update you on my progress...