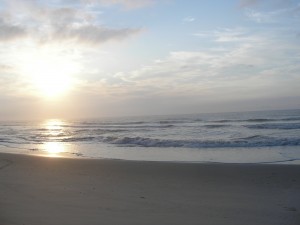 This is the third post in the series -- I encourage you to read Part I and Part II if you haven't yet.

Nielsen claims that belief in God is no more necessary than beliefs in Santa Claus or the Easter Bunny.

"We do not need such beliefs to give our lives meaning or to undergird the moral life, and such beliefs are not essential for an understanding of the nature and destiny of man. The great religions do indeed contain bits which can serve as aspirational ideals, but in this respect there is nothing there that is not perfectly available to the atheist" (p. 109)

The discussion that follows this claim splits into three threads:

Let's look at these in turn.

A brief look at morality

For many people, morality is first introduced in the context of religion. But where one is introduced to what moral behavior is is independent of how one can justify moral beliefs or knowledge of good and evil. The basis of moral beliefs cannot be in a superior entity who is infinitely perfect and good. Even if one accepts that God exists, even if one claims to be aware of the reality of an entity called "God," one must choose to believe that God is infinitely perfect and good. As Nielsen asks, "[h]ow can we know or have reason to believe, except by making up our own minds that he or it is perfect and good?" (p. 114)

To make such a judgment, we must first have some idea of what it is to be perfect and good. Our concept of good must come before our concept of God. Nielsen notes that sure, God could tell us that He is perfect and good, and then we would know that being perfect and good is being like God is, but should one necessarily take such a being on his or its word? Simply saying that something is true does not prove it true. We cannot know except through our own experiences and our own insight (limited, finite, fallible as these are) what any being or entity is. We cannot know any X is infinitely perfect or good, except by making up our minds and relying on our own insight.

But what if one claims that the statement "God is not infinitely perfect" is a contradiction? God must be perfect; this requirement is built into the very logic of God-talk. Nielsen argues as follows: "God" is a referent. "God" stands for something that at least conceivably must exist.

"Now when we say something is good or bad, perfect or imperfect, we are not simply applying a certain descriptive redicate to it. We are not just characterizing it as having a certain property that could, directly or indirectly, be discovered by observation. What we are doing when we ascribe value to something is very difficult to say; sometimes we are expressing our approval of it, taking some interest in it, commending it and the like, but one thing is clear: 'Good' or 'perfect' are not peroperty words like 'red' or hard.' We could not discover some action or person to be good by simply observing it quite independently of any attitudes we might take toward it" (p. 113)

In considering the referent of "God", we must necessarily ground our concept of God is what we have experienced -- which, as noted above, is limited, finite, and fallible. If we observe our own finitude and dependency and conceive of a non-dependent, infinite being, how could we know, simply from being aware of the reality of this being, what its qualities are?

"When we decide to use the label 'God' for this alleged Power or, if you will, this ground of being, we imply that this reality is infinitely perfect, but we are able to do this only because we have a prior and logically independent moral understanding that could not have been derived simply from discovering that there is a reality transcendent to the world, a reality that created man and sustains him, or from discovering that there is some being as such, some ground of being, that is the dimension of depth in the natural. In this crucial way morality, even Christian morality, must be independent of religion" (p. 114)

Nielsen points out that sure, religion may seem to be necessary to some people for psychological stability, moral behavior, and finding significance in their lives. However, this is not true of all people. It merely shows that "some men with an understanding of good and evil need a prod and crutch to continue to act as moral agents" (p. 115).

Although Nielsen doesn't spend any time here talking about where one does get moral beliefs, he has written several more recent books on the subject.

The question of what statements about God actually refer to is one of Nielsen's primary themes. Religions make purportedly factual claims. Factual claims must have a certain logical character, and he argues that religious claims do not follow this logic.

The statements p and not-p may still have meaning and may still be intelligible. But they are devoid of factual significance.

Nielsen argues that if one talks about a non-anthropomorphic God -- i.e., a God is transcendent, non-spatio-temporal, an infinite individual, but not a reality that can be apprehended -- then statements such as "There is a God" and "God created the world" are not false, but entirely unfalsifiable. We cannot confirm or disconfirm them.

If one believes in, doubts, or denies this non-anthropomorphic God, then one cannot think of any conceivable turn of observable events that will change one's opinion of that God's reality or non-reality. (I invite you to try: What evidence would you need to say you are mistaken, whatever your current beliefs are? Do share in the comments.)

If there are no observable events that will change one's opinion of God, then statements like "There is a God" and "God created the world" have no factual significance.

"They are then equally compatible with anything and everything that the believer and non-believe alike can conceive as being experiential. This being the case, they are no more saying anything that is in reality incompatible, than the American is asserting anything that the Englishman is not when the American calls all those things and only those things elevators that an Englishman calls lifts. The man, in such a circumstance, who says "There is a God" is not asserting anything incompatible with or even different from the statement of a man who says "There is no God." But this show that neither statement has factual content; neither succeeds in asserting or denying the existence of the peculiar reality that they were meant to assert or deny. Belief, paradoxically enough, becomes indistinguishable from atheism. But this, in effect, shows that such a believer has not succeeded in showing how he can make a claim to reveal a reality or reveal some level of reality that the nonbeliever does not grasp. The realm of the supernatural remains unrecognizable" (pp. 117-118).

Nielsen recognizes an important objection to his arguments: What if one takes the proposition "There is a God" to be logically or necessarily true? I.e., what if "There is a God" is not taken to be a contingent fact, as is the case in most religious contexts? Then it makes no sense to ask for a contingent, empirical state of affairs to verify the statement's truth. It is true a priori.

The questions become why is God's existence necessary? and why must "There is a God" be necessarily true?

When one says "There is a God," what is commonly being asserted is that there is a being worthy of worship "whose nonexistence is wholly unthinkable in any circumstance" and "[t]here must be no conceivable alternative to such a reality"(p. 119). Nielsen describes a common argument for this position:

Nielsen notes that there are many objections that can be made to this argument, but limits himself to one: In asserting that there is a being we can call "God" and that this being's existence is necessary and its nonexistence is wholly unthinkable, it is not the case that "necessary" must mean "logically necessary." Even if a being was appropriately designated "God" by the above argument, it does not follow that "There is a God" is logical truth and that "There is no God" is a contradiction. Nielsen mentions the following two cases:

We define "God" such that all other beings are completely dependent on God. But the statements "'There is no completely independent being upon whom all things depend' or 'There is a reality whose existence is necessary for all other being' can be significantly denied" (p. 120).

Certainly, it may seem to believers that God's nonexistence is wholly unthinkable in any circumstance, but that doesn't make it self-contradictory to deny God's existence:

"[Believers] can be taken to be asserting that the presence of God is so evident to them that, given their conception of Him as an eternal being, they could not, as a matter of psychological fact, in any way find it thinkable that God should not exist. God's actuality is so vividly present to believers that they could no more, except in a purely logical sense, come to doubt for one moment the reality of God than I could doubt that the earth has existed for many years and that I have been on or near to the surface of that earth during my life. I recognize that I can significantly deny these propositions ... [but] I am quite certain of them, and I find it unthinkable that they might be false" (pp. 120-121)"

If key theological statements are not factual claims, then one ought to reject beliefs based on these statements as irrational and unnecessary.

Nielsen's final thread addresses the claims of Kierdegaard, Tillich, and others that atheism is impossible, incoherent, and a contradiction.

It's not enough to show that religion is often intellectually absurd. Nielsen realizes this. Religion is not just intellectual content -- it's a whole way of life. If one wants to remove belief in God and the religious practices stemming from this belief from the realm of rational acts, one must provide an alternative. One must work to "transform society so that men will no longer need to turn to religious forms to give inspiration to their lives" (p. 123).

Philosophers who Nielsen names as champions of this view include Feuerbach, Marx, Nietzsche, David Strauss, and Freud. He says we can turn to them -- among others -- in our arguments that need no theistic belief to justify our moral convictions or to give significance to our lives. We can and must, he believes, "show that there are other ways of life, other ways of thinking and acting, that are more desirable, more admirable, more worthy of allegiance than our religious ways of life" (p. 124).

In conclusion: People have some knowledge of what's good and what's evil independent of a transcendent reality. Some people have figured out how to give meaning to their lives independent of theism. To believe that this is so, to hope that it could be so for others, and to work to bring about the social and psychological conditions necessary for it to be so is not to deify man or to turn atheism into its own sort of religion. It's just to live.

Nielsen's final point in this section: Atheism is a way of life.