Emotional intensity and the individual

Let's say you're at home. Maybe you're lounging indolently on the couch, feet up on the brown wood coffee table, television whining at you from across the room. Maybe you're cooking tonight's dinner, chopping vegetables with careful strokes, sliding the ever growing pile of peppers and onions and tomatoes into a hissing frying pan. Maybe not. Maybe you're in another room when the fire alarm sounds, bleep bleep bleep, blaring its cacophonous melody into your generally peaceful home.

How do you react? 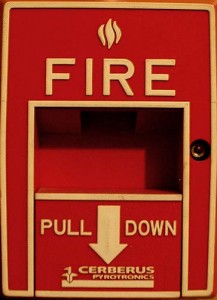 Do you scream? Do you calmly turn off the stove, flap a towel at the cloudy air around the smoke detector, and wait patiently for it to detect that there's not actually a fire? Do you leap up from the couch, tripping over the coffee table in your panic, terrified of burning to death in your own living room?

The strength of your emotional response to this (or any) emotional stimulus is known as emotional intensity. Emotional intensity can be measured with psychological scales, such as the aptly-named Emotional Intensity Scale (EIS) developed by Bachorowski & Braaten (1994) [PDF]. The underlying if obvious assumptions of these scales are that some individuals experience all of their emotions more intensely than other individuals, and all individuals may respond with different strengths to the same stimuli.

Your personality influences your experience of emotions

You may already be familiar with the Big 5 personality factors: Openness, Conscientiousness, Extraversion, Agreeableness, and Neuroticism (sometimes called Emotional Stability). (If not, look them up.) Robert McFatter, in his 1998 paper Emotional Intensity: Some components and their relations to extraversion and neuroticism [PDF], investigated the relation between temperament and the intensity of positive and negative emotions. (Positive emotions included happiness and pleasure; negative emotions included worry, guilt, anger, and sadness.) McFatter described and tested several models, all of which had slightly different predictions about how neuroticism, extraversion, and positive and negative emotional intensity are correlated. 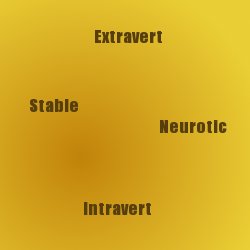 To test these models, McFatter gave a series of questionnaires to 1553 college students taking introductory psychology classes (596 male). Participants completed the 30-item EIS to examine positive and negative emotional intensity (14 items and 16 items, respectively), the Eysenck Personality Inventory (EPI) for measuring Extraversion and Neuroticism (in addition to subscales for impulsivity and sociability), and a third unrelated questionnaire.

It's hard to tell without reading a pile of psychology papers, but the fact that Neuroticism was positively related to positive emotional intensity was surprising. Previous results found a negative relation, though several of these had measured emotional intensity with a different scale--one that seemed to confound frequency and intensity of the experienced emotions. The WBN model, relatedly, claimed that Neuroticism reflected general emotional reactivity. (Recall the personality factor's other name: Emotional Stability.) So McFatter investigated.

McFatter's results, overall, support Gray's model and the WBN model, suggesting that the variations in positive and negative emotional intensity may be the result of separate emotion systems, but that they do have some common variation that may best be explained by their relations to Neuroticism.