My first post-graduation plans have been finalized: I'll be returning to the fine world of software development and robotics for a summer internship at NASA Goddard Space Flight Center. I'll be working with a diverse bunch of engineers and interns on what I expect will be super exciting, super cool projects. 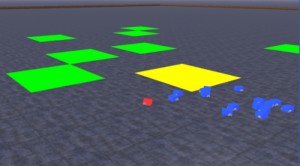 On Friday, I turned in my undergraduate cognitive science thesis. It's been a year in the making -- I started brainstorming ideas last April, spent all summer reading up on relevant literature, and all of this school year developing my model, programming the simulation, running experiments, and finally, writing about all of that.

It's a little weird to realize that I don't have to constantly be thinking about this project any more. I don't have to be, but ever since handing it in, my thoughts continue to swirl around what further analyses to do on the data I collected, how to fix up the studies I did to get more powerful results, which studies would make sense as the next step...

Any agent that functions successfully in a constantly changing world must be able to adapt its behavior to its current situation. In biological organisms, emotion is often highlighted as a crucial system for generating adaptive behavior. This paper presents a biologically-inspired predator-prey model to investigate the effectiveness of an emotion-like system in guiding the behavior of artificial agents, implemented in a set of simulated robots. The predator's behavior was governed by a simple subsumption hierarchy; the prey selected actions based on direct sensory perceptions dynamically integrated with information about past motivational/emotional states. Aspects of the prey's emotion system were evolved over time. The first study examined the interactions of a single prey with the predator, indicating that having an emotion system can led to more diverse behavioral patterns, but may not lead to optimal action selection strategies. In the second study, groups of prey agents were evolved. These agents began to utilize alarm signaling and displayed fear contagion, with more group members surviving than in groups of emotionless prey. These results point to the pivotal role emotion plays in social scenarios. The model adds to a critical body of research in which important aspects of biological emotion are incorporated into the action selection mechanisms of artificial agents to achieve more adaptive, context-dependent behavior.