One of the difficult parts of playing a new sport is that I'm not good at it yet.

My lab played volleyball this summer. Every Wednesday after work, we trotted out to the grass behind the conference center, doing our best not to complain about the humidity and heat. We greeted the other two teams in the league (both of which had clearly played volleyball before--not just in gym class in high school, or, in my case, once during a summer program five years ago), we helped set up the nets, and we began bumping a ball around. 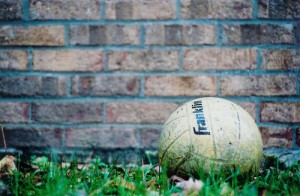 Volleyball was not where any of us excelled. Sure, by the end of the ten weeks, everyone in the lab had improved. We could do what might be called a volley. I could be in the right place at the right time to hit the ball, even if the ball then flew off in completely unintentional directions. When I served, the probability that the ball would both get over the net and stay in bounds was greater than chance (if I remembered to stand on the right, that is, because my serves always flew too far left). It was great fun.

It was also frustrating. I knew that given enough practice, I could be a half-decent volleyballer. Instead of the game being a matter of physical skills and pure luck, it could evolve into a complex, strategic battle, with us setting up plays and plotting out how to outwit the other team. But ten weeks isn't quite long enough to get us to that point. (Sometimes, I'm impatient.) We lost just about every match played against the other teams.

Losing is hard to watch

My lab had split into two teams and recruited a few extra interns, so most days, the five or six of us on my team rotated through four spots on the court. This meant that some games, I stood on the sidelines during the game point.

I had no direct control over whether we won or lost. I had to stand there, watching, as hands missed the ball, as the ball smacked the dusty grass, or flew too far out of bounds. I had no power over how hard my teammates tried (whether they desired to win enough to dive after the ball; whether they were tired and sweaty and just wanted it to be over). I could be a cheerleader, but I could not actively influence the outcome of the game. 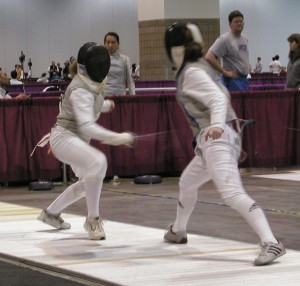 My usual sport is fencing: highly individual, always solo. When you're on the strip, it's just you. If you mess up, if you lose, you only have yourself to blame. Even in team competitions, you're just adding up the scores you and your teammates have separately acquired. You don't realize, unless you've been part of a team, how important it is to trust your teammates. And that's what made volleyball difficult: because none of us were that good, it wasn't easy to trust my teammates to be there, backing me up, putting in their best effort to win even though the games were casual and couldn't be taken seriously given our level of experience.

The thing about trust is, most times, it has to be earned.

Fortunately for my lab, playing volleyball is not what we did full-time. When working on our summer project--establishing the Autonomous Vehicle Lab--I learned I could trust my labmates to have my back. We all cared about the outcome; we could trust each other to each do our part. Not being in control of every little detail (and occasionally standing on the sidelines) was okay, because I knew my labmates were trying just as hard as I was to debug their programs and get the quadcopters flying.

I guess the moral of the story is (besides the obvious "teamwork requires trust"), if you ever have the chance to play a new sport, do so. You never know what you'll learn.