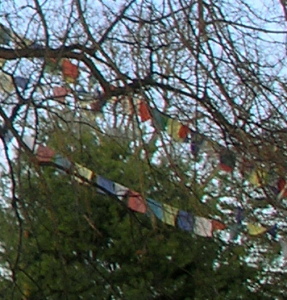 At the Tibetan monastery retreat I attended last month, Ani Kunga led a meditation session for the group about compassion and anger. I said I'd talk about it more: here goes.

I'm going to make two assumptions. First, that positive emotions are, in most circumstances, better ones to be feeling. I've never considered anger and its cohorts--hate, irritation, stress, jealousy, and so on--to be very useful emotions, per se: they solve far fewer problems and make a person feel far less happy than any number of positive emotions. This isn't to say that some amount of anger or related emotions isn't ever beneficial--e.g., when down 1-4 in a fencing bout, as motivation to come back and win--just that, overall, I find positive emotions to lead me to be happier and more productive than negative ones. Surprise, surprise.

Given these premises, and given the choice, why wouldn't a person pick positive emotions over negative ones?

As the group of us relaxed into our meditation cushions, enjoying the sunshine and the spring weather, Ani Kunga shared a statement underlying many of the Tibetan Buddhist approaches to dealing with anger:

She proceeded to explain a few methods for dealing with situations involving angry people:

She also explained a core Tibetan Buddhist concept. Patience, Ani Kunga said, is the main antidote for anger. Anger should be turned into compassion, and fear should be turned into love. She led our group through a meditation session to demonstrate a technique for developing compassion. It involved picturing a person you know, imagining his/her happiness and suffering, and then imagining drawing his/her suffering away such that he/she can be happier.

Although I may not agree with everything Ani Kunga told us, I do (unsurprisingly) like the core message: be proactive. If there's something you can do, just do it. And if there's nothing you can do, well, why not try to spend your time doing things more useful than worrying?